Should You Give Up Carbs for Weight Loss?

For some, it’s thick-crust pizza.  Or grandma’s rich, warm, and cheese-filled lasagna. Maybe for you it’s chocolate chip cookies?

All of these awesome foods are united by one thing: they’re all super heavy on carbohydrates (aka carbs). And since they’re supposedly bad for you, they’re often relegated to the ranks of cheat day meals.

However, as with fat, not all carbohydrates are created equal.

While carbohydrates have gotten a bad rap lately because they are presumably fattening and unhealthy, some cultures with high-carb intake don’t have the same high obesity rates as the U.S. – where one-third of adults (and 17 percent of children) are obese. This is in contrast to Japan where white rice and noodles are dietary staples.

What are we to make of this? Are carbs truly evil? Or should you embrace more carbs in your life?

In this article, we’ll take a close look at carbohydrates — their essential bodily functions, several established facts and hypotheses on whether they are friend or foe, and how eating the right carbs can contribute to a healthy weight and body composition.

Know Thy Carb: The Basics Carbohydrates are one of the three macronutrients (the other two are protein and fat) that your body needs to maintain optimum health and other essential body functions. Macronutrients provide calories, which in turn supply energy.

Of the three macronutrients, carbohydrates act as the main source of energy because they are easily broken down into sugar (glucose to be specific) once they reach your bloodstream and are then transported to cells, tissues, and organs. Think of glucose as fuel.

Carbohydrate sources range from fruits and vegetables to soft drinks and cinnamon buns.

A simple carbohydrate can either be a monosaccharide or disaccharide. They are quickly absorbed into your bloodstream for instant energy because of their simple molecular structure. Think milk, honey, fruit juices, and table sugar.

On the other hand, complex carbohydrates or starches have long chains of molecules and are also referred to as polysaccharides. These carbs take longer for the body to break down into glucose because of their more complex molecular composition.

Grains such as bread, rice, quinoa, and pasta are examples of complex carbs. Starchy vegetables like potatoes, sweet potatoes, peas, corn, and winter squash fall in the same category. As carbs from the lasagna you eat are broken down by digestive enzymes, the amount of sugar (glucose) in your bloodstream increases. This has an impact on your blood sugar levels.

To help manage the sudden spike of blood sugar levels after your cheat day meal, the pancreas takes action by producing the hormone insulin. Insulin facilitates the transport and storage of the energy-boosting glucose to cells as well as to organs that store it — your skeletal muscles and liver.

Once your blood sugar returns to baseline levels as glucose is absorbed in the body, the pancreas will start producing glucagon instead of insulin. Glucagon tells your liver to let go of the stored sugar. This typically happens in between meals.

What if you’re eating too much carbs that is way more than your glucose-storing organs can handle?

There will be frequent outbursts of insulin production by the pancreas. Cells will be less sensitive to insulin and will eventually stop responding to high blood sugar levels. Think of this as your cells ignoring insulin’s pleas to take more glucose from the bloodstream. This is what happens in individuals with Type 2 diabetes or insulin resistance.

In some cases, the insulin-producing cells in your pancreas can’t keep up with the persistently high blood sugar levels and will quit producing insulin altogether. People tend to believe that carbohydrates will make them fat because it spikes insulin levels.

What most people fail to realize is that insulin resistance itself isn’t directly or solely responsible for weight gain. More often than not, it’s the lack of physical activity that’s to blame.

Due to inactivity and failure to use up existing glucose reserves, the skeletal muscles will refuse to accept newer supplies of glucose from the carbs you chowed down recently. As a result, insulin will take the excess glucose to your liver.

What happens if the liver has already reached its maximum capacity of glucose reserves?

It produces triglycerides that are stored as fat. However, this doesn’t mean that you will directly gain weight if you eat carbs. Instead, caloric excess and lack of physical activity are the true culprits.

Consider the extreme example of the New Guinea highland tribe at Tukisenta. It was found out that they consumed 94 percent of their dietary needs from carbohydrates, mainly from sweet potatoes. Yet they were mostly lean and fit, and exhibited no signs of protein deficiency.

In addition, a 2015 study whose findings are published in Cell Metabolism reveals that if you want to lose body fat, the amount of calories you consume will matter more than your carbohydrate consumption.

Such findings also confirmed the results of a  trial nearly three decades ago — specific macronutrient restriction doesn’t directly influence weight loss. As for going low-carb or high-carb, it turns out that neither offered significant weight loss changes over a 12-week period.

To further help you understand why carbs do not cause weight gain per se and not all carbs are created equal,  these two related concepts are worth examining:

Remember how the carbs you consume are absorbed by trillions of cells in your body as well as your skeletal muscles and liver?

But here’s the catch: it turns out that de novo lipogenesis exerts little influence in terms of significant weight gain, particularly if your excess carb consumption is preceded with exercise and carb restriction (which explains why intermittent fasting works for others). Not all carbs are created equal, and some have a greater effect on your insulin levels than others. For people with diabetes or insulin resistance, this is particularly important.

A food’s Glycemic Index (ranging from 0 to 100) indicates how a certain carbohydrate will affect your blood sugar and insulin levels. Foods that digest quickly are high on the index, while those that digest slowly are lower on the index.

Foods that are high on the GI scale, like potatoes and white bread, are quickly broken down. This is what happens when you go through an abrupt sugar rush but eventually crash down minutes later. Foods with a low GI, like sweet potatoes and whole oats, are digested gradually, resulting to a more predictable, steady rise in blood sugar levels.

A food’s rank in the GI scale may be influenced by the following factors:

While it has been shown in a 2014 study that foods with low GI tend to have anti-inflammatory benefits, it worth noting that the Glycemic Index has limitations too. In measuring a food’s GI, researchers tend to isolate the type of food that they feed their subjects within laboratory walls.  Yet within real life context,  these foods are often eaten in combination with each other.

In addition, just because the GI value of a certain food is low doesn’t necessarily mean that you have an excuse to go on a binge. Foods with a low GI aren’t automatically healthy. For example, pizza (Pizza Hut Super Supreme) has a GI of 36 while quinoa has 53. But quinoa has clearly more nutritional value than Pizza Hut’s Super Supreme pizza. Plus, you’re more likely to binge on pizza (more calories!) than quinoa.

If you’re interested in finding out which foods you eat may have high GI scores, you can take a look at the University of Sydney’s GI database to check the glycemic index of a wide variety of foods. So should you give up carbs for weight loss? Difficult to say.

Although low-carb diets were found out to be more effective than low-fat diets for weight loss, there’s also conflicting research findings describing the existence of metabolically benign obesity — obese individuals who are not insulin resistant, have normal levels of circulating insulin, and have zero signs of early atherosclerosis.

The main point is you don’t have to go low-carb, zero-carb, or high-carb to accomplish long term weight loss.

Instead, taking the following steps will help you maintain a healthy weight and body composition minus the guilt of consuming carbs:

Restrictive diets may work temporarily not because of the macronutrient you’re limiting yourself from, but because of the caloric deficit they create. Put simply, it’s because you’re eating less.

Based on recent research findings and established facts, it makes more sense to be more mindful of the specific types and amount of carbohydrates (and the other macronutrients!) that make up a bulk of your daily diet.

It’s very hard to deny the role carbs play in keeping you full, energized, and feeling good overall.  To a large extent, humans were designed to consume carbohydrates as an energy source, and when that source is limited and/or cut off, your body will not appreciate it – and it will let you know.

Should you cut carbs out of your diet? If it’s part of a general overall caloric reduction to lose body fat – which does work – combined with increased exercise, then yes. But simply hacking out an entire macronutrient source – any source – is not only going to be incredibly demanding on you, but also ineffective and unsustainable over the long-term.

And that says nothing about how much harder it can be to work out without your body’s favorite and preferred fuel source. That’s a story for another day.

Carbs, protein, and fat – your body needs them all. 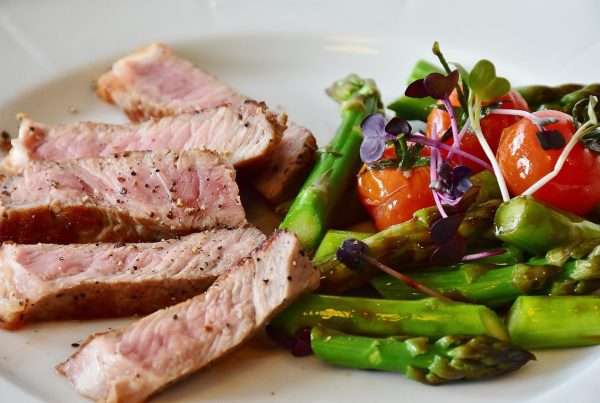