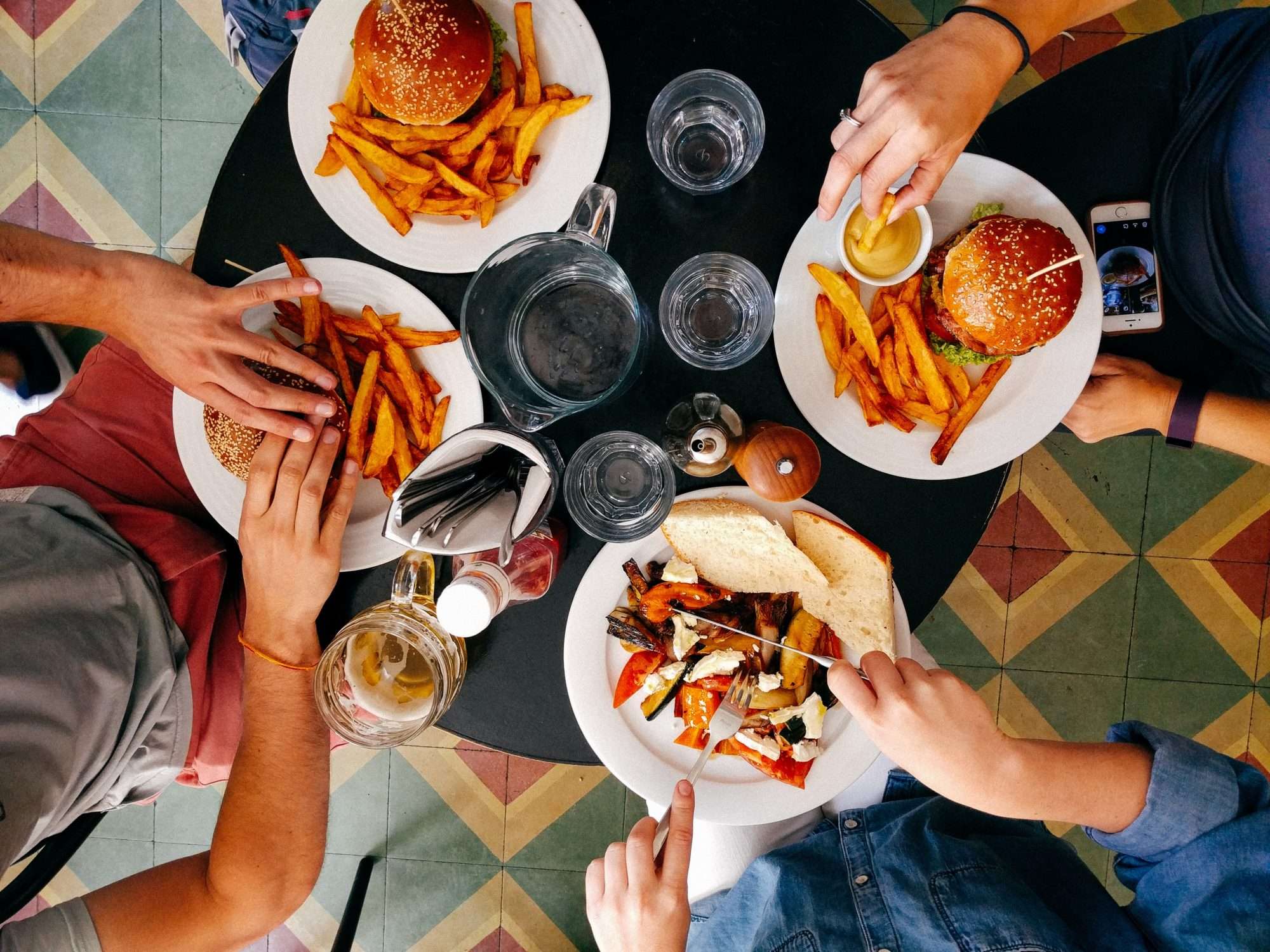 How to Stop Overeating Once and For All

Editor’s Note: This post was updated on September 6, 2018, for accuracy and comprehensiveness. It was originally published on August 22, 2017

At dinner last night, one slice of chocolate cake somehow turned into half a cake…

Today, you stuffed yourself with five buttery rolls at the office potluck. That wouldn’t have been so bad if you didn’t eat three plates of food.

We’ve all been there, and we all know how those post-binge episodes go — from guilt to frustration to promising yourself that it’s going to be the last time you stuff yourself with unhealthy food! (Not to mention the dreaded food coma…)

You thought you’ve overcome overeating for good, yet it turns out that you’re back to square one when it comes to getting your cravings under control.

Why is it so hard to break out of this cycle?

Is there a way to kick this ceaseless habit for good?

Does it have to do with self-control and having an endless supply of willpower?

Or is there some otherworldly, mystical force that you need to tap on in order to break free from binge-eating episodes?

To help us figure out if it’s sorcery or science, this article is divided into two parts.

First, you’ll learn about the possible reasons why it’s so tempting to finish a large box of pizza all by yourself. Second, you’ll discover how to put an end to compulsive overeating and finally take your body composition goals seriously.

With obesity affecting more than one-third of the U.S. adult population, getting out of the binge-diet cycle remains a puzzle to many.

To have a greater understanding as to how overeating happens, it makes sense to initially get a grasp of how our appetite, or the desire to eat, works. It’s worth noting that appetite is a tad different from hunger. Think of hunger as a need to eat while appetite is more like a desire to snack mindlessly even after you had lunch.

At a fundamental level, hunger and appetite are both influenced by a network of pathways involving the neuroendocrine system. Appetite regulation, satiety, and energy balance involve the following:

The smart folks over at ASAPscience simplified the science of hunger and cravings in a two-minute video below. It talks about the body’s hunger-regulation system and why we’re tempted to go for second helpings.

In essence, high-calorie foods rich in fat and sugar were extremely desirable to our hunter-gatherer ancestors for survival because they were scarce. However, this instinct for fatty and sugary meals still remain even though these types of food are now available 24/7.

In a nutshell, the more you gorge on food laced with too much fat and sugar, the more likely that you’re going to get addicted to it.

On Homeostatic and Hedonic Hunger Another way of understanding appetite is to look at it from the perspective of eating for two main reasons— as a response to hunger (homeostatic) and for pleasure (hedonic).

In a review of studies differentiating the two, the researchers described that homeostatic hunger is the result of the prolonged absence of energy intake or the food itself, while hedonic hunger is strongly influenced by the availability and palatability of food in your environment. Furthermore, a 2016 study found out that intense feelings of pleasure derived from palatable foods (hedonic hunger) predicts the likelihood of losing control when eating among female college freshmen.

Why You Really Overeat and Binge At first thought, it seems like putting an end to overeating is simply a matter of telling your brain to stop consuming food. Yet we all know that it’s not that easy, right?

Your brain may be the main driving force behind your cravings, but it’s not acting alone.

The frequency and the amount of food you finish is also influenced by a complex interaction of the following factors:

Your gut, hormones, and brain may be working together to control appetite, but your genetic makeup also has a say as if you’re the type to overindulge.

For instance, a London study on children revealed that genetic influences on weight and abdominal fat accumulation are high in children who are born since the onset of the childhood obesity epidemic. Furthermore, there is evidence indicating that specific genes can possibly impact your likelihood of frequent LOC (loss of control) eating episodes.

Environmental factors also contribute to the rise of food cravings. These factors include the atmosphere of the room and the presence/absence of distractions during meals. This also applies to social and cultural cues. Remember a time when you overindulged because everyone seems to be in the mood for feasting?

Finally, child feeding practices by parents during the first years of childhood tend to impact one’s eating behavior later in life. A review of studies on the parental influence on eating behavior revealed the following interesting findings:

Did you know that not sleeping enough or getting stressed over finals week could lead to you reaching out for the cookie jar 5x a day when we’re not actually hungry?

It turns out that your appetite and hunger regulation is also influenced by these behavioral factors.

In fact, evidence from longitudinal studies suggests that chronic life stress may be linked to weight gain, with a greater effect seen in men.  Furthermore, your work schedule can also impact how much you eat. A study revealed that shift workers may be particularly vulnerable to the tendency to eat the largest meals in the evening as they remain awake longer during the times when you naturally feel hungry for high calorie sweet, salty, and starchy foods.

Your Action Plan to Curb Overeating (Without Depriving Yourself) Whether it’s stress or social pressure that’s driving you to overeat, we all know how frustrating it is to realize that you gave in to your cravings (again!). The good news is you can do something the next time you’re about to open your third bag of chips.

For a start, consider the following easy yet sustainable solutions to put an end to overeating, minus the horrible feeling of self-deprivation.

1. Learn to recognize the difference between homeostatic and hedonistic hunger.

As mentioned earlier, you can eat because you’re hungry but you can also eat for pleasure.

It can be a struggle to figure out the difference between the two because it requires you to be more mindful and listen to your body. As a result, misinterpreting these signals can lead to overeating.

While these cues will differ from one person to another (as well as depend on the time of day), you can learn to recognize your motivation for eating and adjust your eating habits by asking the following question:

Am I eating as a response to a physical cue (e.g. growling stomach, headache) or am I eating because I am feeling stressed, anxious, or overjoyed?

Whether you’re stressed about deadlines or bummed about your annual employee performance review, talking to a friend or journaling may be more helpful than emotional eating.

2. Be mindful of your “food environment”. Your “food environment” may be divided into two parts:

Before eating two bagels in one sitting, savor one piece instead. Furthermore, you might also want to use smaller plates and bowls to avoid taking in too much when you’re in a buffet. Research reveals that larger plates can make a serving of food appear smaller, and smaller plates can lead people to misjudge the same serving size of food as being significantly larger.

When you’re distracted, you tend to eat mindlessly. As a result, you’ll be less sensitive to satiety cues because your brain is paying more attention to other things.

Known for having one of the longest life expectancies in the world,  Okinawans call this practice as “Hara Hachi Bu”, and this can be a useful guideline to help stop overeating.

A Greek study found that eating at a slower pace tended to increased fullness and reduce hungry feelings in overweight and obese participants.

Surround yourself with people who are taking steps to eat more mindfully.

Whether it’s your co-worker who’s into calorie counting or your brother who’s a geek when it comes to meal planning, being around others who eat mindfully will help reinforce your own good habits and perhaps teach you some new tips and tricks as well.

3. Make tiny adjustments to your daily habits that may impact your eating behavior. Curbing overeating is not about making massive changes in your life but rather making tiny adjustments to your daily habits.

Going on a “healthy” detox diet or juice cleanse right after binging may help your weight loss temporarily, but it’s not sustainable in the long run. Instead, you’ll likely end up going through the same cycle of overeating, feeling guilty, restricting yourself, and giving in again to cravings. That’s why making smaller healthy changes is more effective for changing your lifestyle permanently.

These are three examples of tiny adjustments you can make to your daily habits.

As mentioned earlier, lack of sleep can lead to eating more and sabotage your weight loss efforts. Are you struggling to get a good night’s sleep? Establishing a consistent bedtime routine may be a good start. An irregular bedtime schedule is linked to poor sleep quality.

There may be some exceptions (like when you’re doing intermittent fasting), but skipping your morning meal usually leads to overeating because you end up feeling famished throughout the day. On the other hand, a healthy high protein breakfast has been shown to stabilize blood sugar levels, increased satiety, and reduced hunger cues.

Remember how high-calorie food that’s loaded with salt and sugar tends to encourage overeating? That why food choices are important. By opting for whole food alternatives, you will eventually reduce your cravings for unhealthy sweets and salty treats.

Don’t just adopt the latest trending diet and toss all the junk food residing in your fridge right away. A good rule of thumb is to have at least 80 percent of your daily meals from whole food sources and devote the rest to the not-so-healthy food items. And when the craving hits reach for a healthy snack like fruit or nuts. By doing so, you won’t feel deprived, which in turn can lead to another binging episode.

A lot of people can relate to overeating (because it happens to the best of us too!) but food addiction is a different story. If you feel that your binging episodes has turned into more than just a bad habit that you can change, seek professional help.

The Takeaway: Mindful Eating Can Go a Long Way for Your Body Composition If you’ve noticed, the majority of the points discussed in the action plan has something to do with mindfulness.

Recognizing if you’re truly hungry or simply eating as a response to stress or other environmental factors requires constant practice and a heightened sense of self-awareness.

The idea of mindfulness may sound like a meditation fad or just another self-help woo-woo. However, mindfulness-based interventions in addressing compulsive overeating and other obesity-related eating behaviors have gained popularity recently. In fact, a systematic review of related studies on the topic supports its efficacy.

Overall, beating overeating and taking your body composition seriously begins with this single step—uncover the reason behind your binging habit. Keep in mind that you need to know the “why” first before diving into the “how” of putting an end to your tendency to overeat. Once you figure out your “why” the benefits are tremendous: a healthier relationship with food, weight loss, and a better sense of control. Good luck and here’s to a happier more mindful life.

Is The DASH Diet Right For You?