How to Fight Diabetes with Improved Body Composition

The more you look at the statistics, the more it seems that type 2 diabetes might be one of the quietest epidemics in recent medical history. What used to be seen as a disease that affects primarily adults now appears in children and teens with frightening frequency.

Currently, more than 29 million Americans have diabetes. What’s worse, 25% of those people aren’t aware that they have it. Adding on to that is that a third of American adults – over 80 million people – currently have prediabetes, unbeknownst to them (you can check your risk level with the link above). That’s right: it’s not just about how many people have diabetes–it’s about how many people don’t know they have it, or are at risk for it

And the future isn’t looking much brighter. Study after study predicts that the situation could continue to worsen over time, with the number of people diagnosed with diabetes increasing dramatically.

What’s going on, and what role does body composition have in developing or preventing diabetes?

Quite a lot, actually. And, as is usually the case, the starting point is taking deeper look into body weight to understand how it misleads so many people.

For many years, type 2 diabetes was thought to be a lifestyle-caused disease linked primarily to obesity. While it’s true that obesity rates have risen together with diabetes cases, there’s a major outlier that’s changing the way how one develops diabetes is understood. People with so-called “skinny-fat” bodies are (and have been) developing diabetes to such a degree that they’re now identified as an entirely “new” population that’s at risk for developing diabetes.

Skinny-fat people are characterized as having a normal weight, overdeveloped body fat mass, and underdeveloped muscle mass. An example body composition breakdown for a skinny fat person would look something similar to this:

Notice the low levels of muscle and high levels of body fat? Both of these can contribute to the onset of diabetes, but they do so in different ways. But how, and why? In order to understand these questions and to find solutions to them, first you must understand what happens in a diabetic’s body.

The simple sugar that cells rely on, glucose is the result of digestible carbohydrates being broken down and absorbed into the bloodstream.  Rises in blood sugar levels are the catalyst for you to make and release insulin. Insulin is a hormone that allows your body to use the glucose derived from your food.

Unlike in type 1 diabetes, where your body doesn’t actually produce sufficient insulin, type 2 diabetes occurs when your body can’t properly use the insulin it makes. This is called insulin resistance, which over time typically requires that diabetics take supplemental insulin. 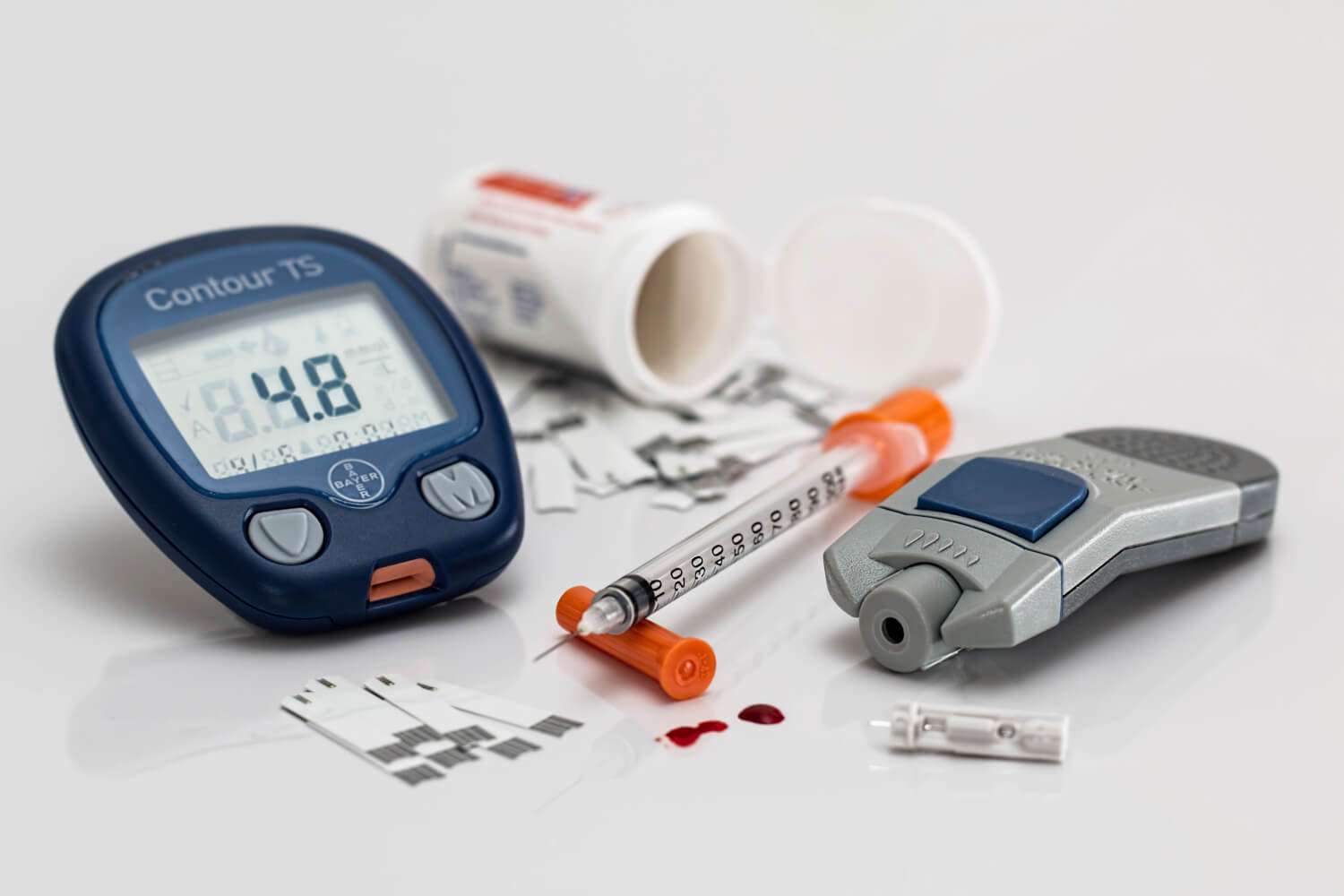 So where does muscle fit into this conversation? Turns out your muscle mass – or your lack of it – can play a major role in developing insulin resistance. Sarcopenia, the medical term for underdeveloped muscle and a characteristic of skinny fatness, has been linked with increased insulin resistance and the development of type 2 diabetes – independent of obesity itself.

This greatly helps explain the rise in cases of prediabetes and diabetes – it’s not something only developed by overweight or obese people. People with little muscle mass, but a normal body weight created by the compensating overdeveloped body fat, share the same risk. What’s worse, once type 2 diabetes does set in, diabetes itself has a very damaging effect on skeletal muscle mass which compounds the problem further.

But of course, muscle mass is just one part of a poor body composition that can put someone at risk of developing diabetes. Increased body fat still does play a major role in the development of diabetes, and it’s a characteristic shared by both skinny fat people and those who have both high body weights and high body fat percentages.

When looking at the relationship between type 2 diabetes and body composition, one of the most important factors to keep in mind is the role of increased body fat levels. This relationship has been established time and again, and hardly bears worth mentioning.

What does bear mentioning is that recent research has been able to determine which type of body fat most contributes to diabetes: a type of fat called visceral fat. Defining visceral fat is actually pretty straightforward: it’s excess intra-abdominal fat. This fat wraps itself around major organs and can have some serious effects on a person’s health.

Recently, a study was released that focused on the role that visceral fat mass plays in type 2 diabetes. Part of their findings showed correlations between various body measurements and risk for diabetes/prediabetes:

That orange line designates visceral fat, and it proved to be the single best predictor of both conditions.

It’s easy to say that body fat and diabetes have an established link. What really matters is the specifics – visceral fat is the real culprit here. Diabetes is a serious disease, and depending on the severity of it, can require different combinations of medications, lifestyle interventions, or both.

While no one is suggesting that you can simply diet and exercise your way out of diabetes (although it at least one case, that did appear to happen), it is true that with lifestyle changes and a modest body weight reduction of 5-10%, type 2 diabetes is largely preventable.

This is definitely good news; however, statistics like these lend themselves to an often counterproductive focus on body weight as the only measuring stick of progress.

Remember the earlier example of skinny fat and low muscle mass? That’s a prime example of where an over-reliance or dependence on body weight alone can lead you. So instead, let’s have a look at how improvement to your body composition (your fat mass, your muscle mass, etc.) can have an impact on diabetes.

For starters, Let’s start with glycemic control and body fat.

Poor glycemic control, which refers to the typical levels of blood sugar (glucose) in a person with diabetes, has been identified as one of the principal clinical parameters of insulin resistance.

To better understand the importance of glycemic control and its relation to improved body composition, take a look at a recent study that focused on the changes in fasting plasma glucose.

Patients with type 2 diabetes were kept track of for 6 months, with body composition (visceral fat area, body fat mass, and percent body fat) being assessed. The purpose of this study was to evaluate the relationship between these two components (body fat and glycemic control), and the study had a pretty interesting result: decreased body fat mass and visceral fat area had an improved effect on glycemic control.

Sounds good, but what about muscle?

A study conducted with Japanese type 2 diabetic patients (already with insulin resistance and cardiovascular risk factors) aimed to better evaluate the characteristics of body composition in patients with type 2 diabetes.

After comparing healthy subjects and subjects with type 2 diabetes, it became abundantly clear to the researchers that those with diabetes are more vulnerable to a reduction in skeletal muscle. That being said, there was an interesting form of intervention. Apparently, instruction in exercise (which includes resistance training) was seen as a worthwhile treatment to prevent the continued degeneration of muscle.

A second study offers even better news, going beyond simply the prevention of degeneration of muscle (and the spiral of increased insulin resistance that comes with it). Diabetics who trained for 30 minutes a day, 3 times a week were shown to have increased glucose clearance as a result of their increased muscle mass. That’s because this increased muscle mass signaled to the body to release more insulin – lowering blood sugar.

Combine these positive results with those derived from reduced visceral fat, and the evidence is pretty compelling that you can do a lot more for your diabetes than take medicine and modify your diet – although these can be important as well, depending on your case. But regardless of your situation, it seems clear that you can benefit from improved body composition, and the best part about that is that’s directly under your control. There are two major lessons here, and they both revolve around body composition.

No one is saying that if you’re skinny fat or overweight, you’re for sure going to develop diabetes later in life. Your diabetes risk is set by a number of factors, including your age, family history, genetic background, and more.

But you might. While that might seem like a bleak statement at first, it’s really not because unlike age, genetics, etc., your body composition is something you have a huge degree of control over, and something you can take responsibility for.

If you’re looking to offset the negative effects of diabetes (or prediabetes), avoiding muscle loss is key. There are a few ways to do this, although the simplest are just ensuring you have a healthy diet and exercise regularly.

Remember: it’s not about weight. It’s about understanding your body, setting reachable goals, and meeting them. If you can do that, you can regain control over your condition and live a happier life overall.

Brian Leguizamon is a content marketing specialist. Brian has worked with Shopify, Gigster and a bunch of startups you’ve never heard of. When he’s not working, you’ll find him at his local gym, waiting for the squat rack to open up

Ryan Walters is a digital marketing specialist at InBody USA